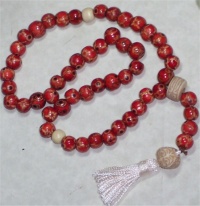 Prayer beads, once charged sufficiently, can be used in rituals instead of holy amulets, holy symbols and holy relics, reducing burden, inventory clutter and complication in performing rituals (you only have to have your beads to hand, not a whole host of holy components). Note that while beads must be held in order to charge them, they do not need to be held while performing rituals that require them - although they must be in your immediately accessible inventory (i.e. not in a container). They will be automatically retrieved from any container identified as a component pouch when needed for a ritual, and will remain in your carried inventory afterwards.

Custom prayer beads in a wide variety of colours and materials can be bought from Gemma in the Temple of Small Gods, one floor up from the ground floor. If simple options are selected (e,g.., ribbon, pine beads, no adjective, model of Pishe), one can buy custom beads for AM$50, the same price as non-custom beads.

Beads are charged whenever they are held while performing rituals, praying, consecrating, or ritual burying. Priests and followers can charge beads.

Repairing clothes on Gapp's altar, though it uses faith gp, does not add any charge to beads.

The beads give off varying degrees of holy auras (which can only be observed by those of the faith) that give an indication as to the amount of guild points that have been instilled within them.

The diagram below gives some idea as to the scale involved (The listed auras being at the start of their respective ranges).